How a lifelong learner found her way into Naturopathy

Alejandra Blanco turned her passion for health into a career in Naturopathy – and now runs her own clinic in her homeland of Mexico.

If you ever feel like quitting, take a minute to think again about the reason that motivated you to study a degree in the first place.

Alejandra Blanco’s story proves it’s never too late to pursue your passion. The international graduate from Mexico had worked in various roles around the world, but it wasn’t until completing her Bachelor's degree in Naturopathy at Torrens University Australia that Alejandra was able to achieve her ultimate goal. The 40-year-old has just set up her own naturopathy clinic in Mexico, splitting her time between Australia and her home country to live out her dream career.


Alejandra Blanco was one of the finalists for the 2022 PIEoneer International Alumni of the Year award.

At 18, Alejandra was recruited to play tennis for a university in the US where she studied her first degree in hotel management. Through her studies, she landed a job working on a cruise ship as a fitness instructor. Four years later, she returned to Mexico to study nutrition, with the aim to offer her clients more in-depth dietary advice.

“During my time in Mexico, many doors opened. I was and still am invited to talk on multiple radio and TV shows, and I was also invited to teach health courses,” says Alejandra, who then went on to run her own health centre.


' Alejandra dedicated herself to the centre for almost four years before deciding it was time to expand her expertise. That’s when she returned to Australia to study a Bachelor of Health Science (Naturopathy) at Torrens University.

Thanks to the degree’s flexible course structure, Alejandra was able to travel to Mexico during trimester breaks to see her clients. And when border closures halted her travel plans, Alejandra was quick to adapt: “I was able to continue doing consultations online.” Alejandra’s degree in Naturopathy gave her the skills and know-how to set up her own clinic. Now, with borders open again, she plans to practice between Mexico and Australia, giving her globally recognised qualification a real workout.

Alejandra admits her journey was challenging, especially as a mum to a 14-month-old. “As an international student, I understand what it takes to do a degree in a language other than your native one,” she says. “I thought about quitting many times, especially once my baby was born.” 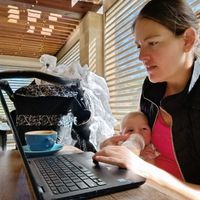 But it was her “never give up” attitude that motivated Alejandra to push through – as well as the encouragement she received from her lecturers.

“I appreciate that all of my lecturers taught with passion, and were there to help and support me,” says Alejandra, adding that studying overseas and starting a new degree even after having found career success is one of the best decisions she’s made.

For anyone who might be in two minds about their own study journey, Alejandra has these words of wisdom: “If you ever feel like quitting, take a minute to think again about the reason that motivated you to study a degree in the first place.”