Being Proud of My Autism: How Penny Became an I CAN Mentor

“I hope that in the future, more family members are proud of having an autistic family member, just as my Grandma was of me.”

When Penny Robinson was a child, her parents noticed that she interacted differently to other children. Thinking she was having problems with communication, they put her through several different courses of speech therapy, from an early age. It wasn’t until high school that one of her teachers suspected her of having autism.

“I was diagnosed with Asperger’s at age 14. An astute teacher had suspicions after I wrote a 6-page personal writing piece about my ‘speech problem’.  Some people say I was diagnosed late, but ‘Asperger’s’ was in the DSM IV in 1994 and I was diagnosed in 1997.

Many women my age ‘slipped through the cracks,’ (going undiagnosed through childhood) and are now being diagnosed as adults, often after their own child’s diagnosis.” During the early years of high school, Penny was bullied because of her difference. Unfortunately, this is a common experience for kids on the spectrum, who are five times more likely to be bullied than those who aren’t. Since Penny left school and went to University, she found much greater social acceptance.

“I didn’t meet anyone else ‘like me’ until halfway through the first year of university, almost five years later. Thankfully, I’ve felt accepted for who I am while studying, and now in the workplace. I think it’s important that kids accept people’s differences, although adolescence is difficult for all students.

After eight years of studying a Bachelor, Honours and Masters degree, I knew that work would be completely different.  It was at this point that I joined Aspergers Victoria and started going to their support group meetings for adults.”

In 2012, Penny was asked to speak at the Aspergers Victoria “Discovering Diagnosis” panel event. Shortly after that, while studying a Graduate Certificate in Academic Practice, she received an email from the Disability Liaison Unit at the university. The email was about a meeting to discuss the start-up of I CAN Monash. Luckily, the meeting coincided with her break. She went along, and it changed her life.

“When I CAN started, I was referred to as the ‘All Round Guru’, because I was involved in everything! I’m one of the founders of the I CAN Network, along with Chris Varney and James Ong. I’m now an ambassador and speaker in the Speakers Agency for The I CAN Network.

I’m also an Ambassador for Yellow Ladybugs (which is based around activities for autistic girls) and Ambassador and ‘Twitter Queen’ of guest speaker events for Aspergers Victoria.” The I CAN Network is Australia’s first social enterprise run by people on the autism spectrum.

Built around the mission to rethink autism, the network runs mentoring and education programs across Australia. Children, young people and adults are invited to share stories and engage in workshops on topics that interest them. They get to meet others on the spectrum and to learn to see their own condition in a positive light.  I CAN also publicly advocates on behalf of and provides work opportunities for people with autism.

“The I CAN Network is a rethink on autism, making autism mean ‘I CAN’ not ‘I can’t’. We focus on the strengths of the spectrum, rather than the deficits. We run mentoring programs in schools, ‘Imagination club’ for primary schools, I CAN Schools™ for secondary schools, as well as camps and the speakers agency (which I’m a part of).

“I’m doing the MOOC because some of my videos are in it, and I know many others who have contributed videos too. The majority of the learning materials are short videos from autistic individuals and their parents. I’m always learning more about autism – both about myself and through others experiences.

I like the ‘person first’ approach – which gets participants to put themselves into the shoes of the autistic individual, to see it from their point of view.

Many people on the autism spectrum feel that their autism is a part of them, hence they prefer ‘identify first’ language and will identify as autistic. Also, some autistics are non-verbal, but just because they don’t ‘talk’, doesn’t mean they don’t have anything to say.

here are plenty of other ways to communicate too. If I’m processing emotional stuff, I prefer to communicate via email, messenger or writing instead of verbally saying it.”

The ‘autism spectrum’ encompasses a broad range of different experiences and conditions.

Because everyone has different needs and different approaches, Penny is a big advocate of ‘doing autism’ your own particular way. For her, that means allowing herself to learn and develop at her own pace, rather than trying to do what everyone else is doing.

She completed year twelve of high school over two years. She moved out of home when she was thirty (as opposed to her sisters, who moved out in their mid-twenties). In her working life, she gradually increased her teaching commitments at a pace she could handle. She was promoted to Lecturer at the end of 2016. 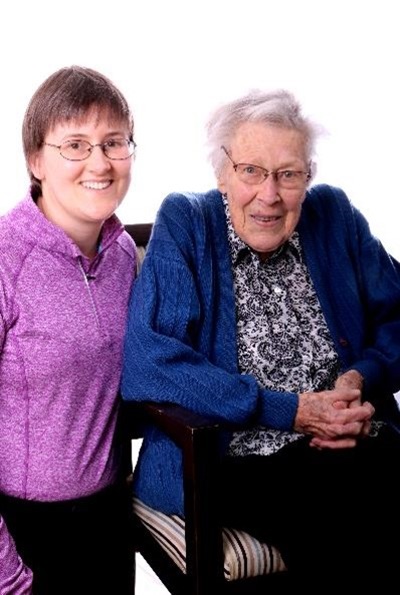 “I believe that everyone has their OWN journey and their own timeline. Don’t be afraid to do it ‘your way’, in your own time.  Take many small stepping-stones to achieve your goals – rather than fewer, bigger, more daunting ones.

My family (including my recently deceased Grandma) have been extremely supportive of me growing up. Grandma lived in aged care for the last 17 months of her life. When a staff member came into her room while I was visiting, she’d always want to introduce me to them: “My granddaughter,” she would turn to me, “say what you do.”

It was equally important to her that I introduce myself as a Lecturer at Monash University, as well as having me mention that I’m autistic and give talks on my personal experience. She was proud of me for both.

I hope that other families are also supportive of their autistic family members, so they too reach their potential – whatever that may be.


If you are a teacher, educator or a family member of someone on the Autism spectrum and you want to understand how you can better support their learning process, please follow this link for more information on the Graduate Certificate of Education (Autism).