This ground-breaking publication will benefit everyone in the naturopath profession globally, including our Naturopathy students and academics at Torrens University.

Earlier this year, the World Naturopathic Federation (WNF) launched Naturopathy, practice, effectiveness, economics & safety – the first Health Technology Assessment (HTA) of the naturopathic profession. The HTA, a 754-page report, provides an evidence-based summary of naturopathic practice and the safety, economics and effectiveness of naturopathic care. And we’re proud that Australians were at the forefront of this publication, led by the Naturopaths and Herbalists Association of Australia, whose president David Casteleijn is an academic at Torrens University, teaching in the Naturopathy and Herbal Medicine courses. As well, Catherine Smith, Torrens University’s Program Director – Naturopathy and Western Herbal Medicine was part of the HTA’s international writing team of 51 naturopaths, and contributed to the chapter Complex Naturopathic Interventions. 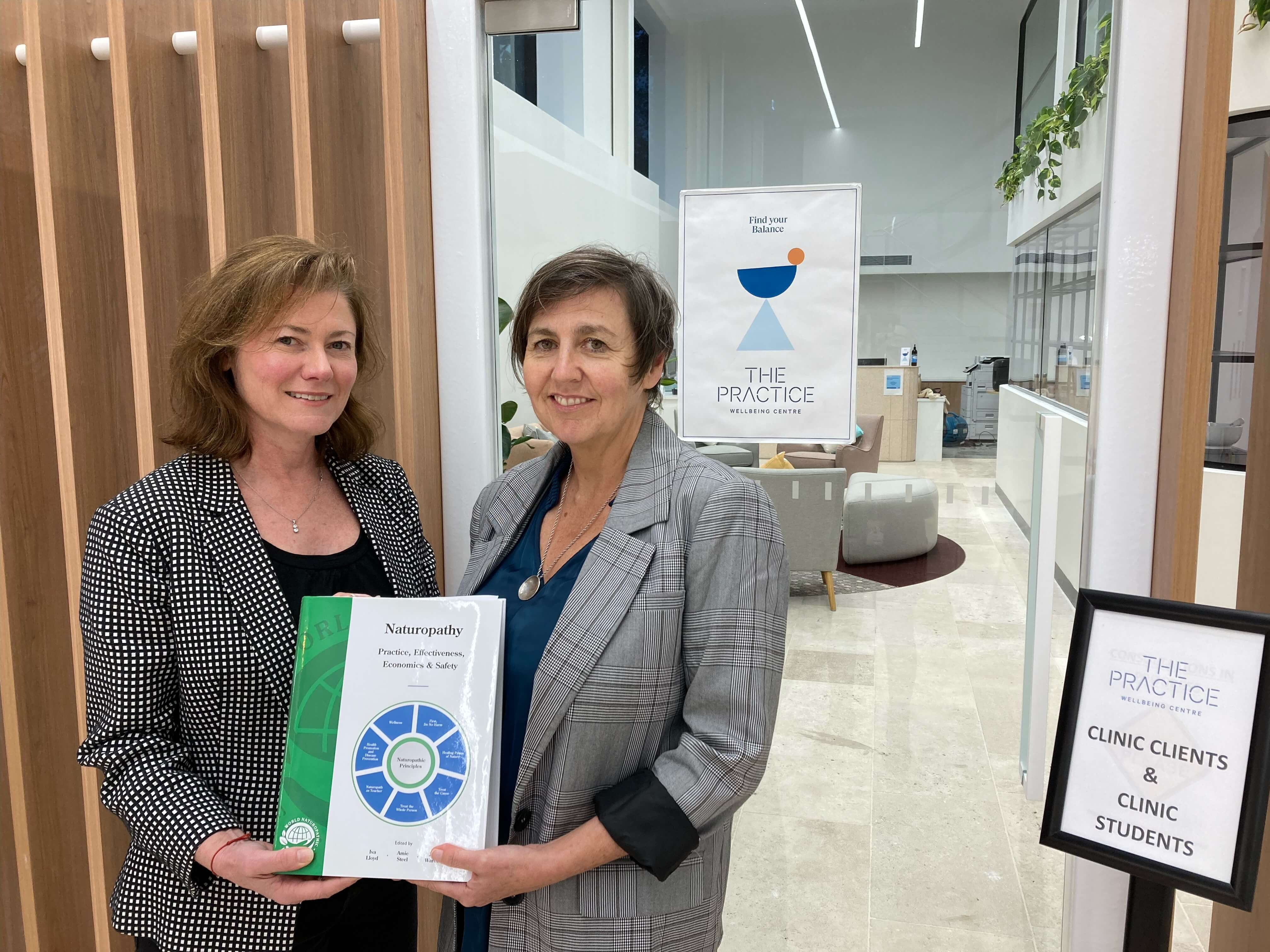 Catherine Smith (right) and Natalie Cook (left), Director of Innovation, Industry & Employability, past President of the NHAA, and former Treasurer of the World Naturopathic Federation, holding a copy of the HTA at our The Practice Wellbeing Centre in Surry Hills.

What is a Health Technology Assessment (HTA)?

‘A Health Technology Assessment is an Australian idea,’ David Casteleijn explains. ‘You'll find that essentially every Health practice will have an HTA. Governments look to them so that they can understand the profession. It is set out in a very logical, prescriptive way. A HTA outlines the profession, where it is in the world, who the people are who practice it, and outlines the regulatory environment internationally.’

What makes the HTA on Naturopathy outstanding?

‘The amount of evidence that has been collated together in the HTA is really quite extraordinary,’ says David. ‘Not only do we have evidence on the extent of practice, where it's practiced in the world, where it's regulated, where it isn't, we also have very good evidence now on what naturopaths do and what they focus on. One of the most important things this evidence shows is just how much naturopaths focus on all of the lifestyle factors that have such an impact on our health.’

The lead editors of the HTA were naturopaths Dr Iva Lloyd from Canada, and Dr Amie Steel and Dr Jon Wardle from Australia. Dr Lloyd, who is also the president of the WNF, explains the unique aspects of the HTA:

‘It's done for policy makers and accreditors, educational institutions and governments. It looks at what is the foundation of your practice, and this is where I think it does a really good job of defining the profession. Most people base an HTA on the current research that is there. We went for a step further, and from 2015 we carried out seven international surveys to back anything that we said. The surveys asked the questions, "What is your profession? What is the practice like? What's the regulation? What's the history? What's the risk? What's the economics? What is the research?" And we did the research.’

The contributors to the HTA included 51 naturopaths and naturopaths, spanning five World Health Organization (WHO) Regions. Its scope was informed by research conducted by the international naturopathic community over the last 30 years. It encompasses over 2,000 peer-reviewed scientific articles, including a review of more than 300 clinical studies involving over 100 different health populations.

‘When we did our international surveys, they were in five languages,’ Dr Lloyd says. ‘So we really did as much as we could to encompass the whole naturopathic profession. Also unique was the amount of surveys we did. For example, the naturopathic profession is known to be eclectic. It's known that when people go to see a naturopathic doctor, they're going to get advice on lifestyle and herbs and diet, and a number of other things. We know this, but there was no research to back it. So we did an international survey and we had 585 naturopaths around the world respond. Then we could say, "The average naturopathic visit involves ..." Or, "A naturopath will prescribe an average of four modalities or treatments in each visit."

‘Anything we said had to be reflective of the global profession. So other than just being a standard HTA, which is very helpful for governments, I think it sets a bar for how you define the profession.’

The NHAA and its involvement in the HTA on Naturopathy

David explains, ‘The NHAA is one of the many natural medicine associations that practitioners can be members of. The uniqueness of the NHAA is that we only represent naturopaths and herbalists. Everything we do is focused on bettering those professions and supporting our members in numerous ways.’

‘What drew me to be on the NHAA board was really wanting to demonstrate that naturopathy is an important Health profession; that naturopaths have something to contribute to the areas of antibiotic resistance, of obesity management, preventative health, for example. It’s very important for the profession to be considered part of the healthcare landscape.’

‘This fits in with the aims of the HTA, which is why I'm so pleased that the NHAA came together and said, "Yes, this is so important for the profession. We will fund this." The NHAA funded all the research and the WNF funded the printing and publishing. That's something I'm very proud of as its president.’

‘One of the things that we found from the surveys,’ says Dr Iva Lloyd, ‘is that 98% of naturopaths do some form of community education. So now we can say with confidence that practitioners in the naturopathic profession are leaders in increasing Health literacy. One of the key criteria of the Declaration of Astana, is to increase health literacy, and we do that.’

How to use the Health Technology Assessment

‘Read the synopses,’ is David’s wise advice. ‘Then you'll understand what is in it, so when you need to know more information, you can come back to the HTA and find it. Look at the amount of research, and then you can go and find those pieces of research and review them, make your own assessment of them. It gives you such an incredibly good central starting point to jump off from. There is a wealth of resources that students can tap in to.’

The future of Naturopathy

Dr Iva Lloyd has an inspiring view of the future for the profession:

‘We're the experts in lifestyle medicine, so stand up and say, "We're the experts." The profession internationally is also good with prevention, it’s good with NCDs [Noncommunicable diseases], so I think the naturopathic profession has a significant opportunity to play a much bigger role than they could ever imagine. Look for the opportunities to be engaged. Look for the opportunities to be involved.’

‘Through the pandemic, it has really highlighted the importance of healthcare and of prevention. People are going to be focusing on prevention, and this is what the naturopathic profession has always stood for. I think you will see a significant demand for naturopathy; a significant increase in naturopathic professionals being called for their input with respect to whole-person care, health literacy, and many other things.’

‘I'm excited for the naturopathic profession.’

Looking at the role the HTA will play in the recognition of naturopathy by governments and the public, David says, ‘Now we can very clearly say, "Well, no one can claim there is no evidence, because here it is. Here is the evidence." It's 754 pages, hundreds of pieces of research. There is just so much research now, so much evidence that we should not be able to be ignored anymore.’

The NHAA will officially launch the HTA in Parliament House in Canberra in November. ‘We'll be inviting politicians and health policy makers and many others,’ says David. ‘That's the first step in us getting it out there.’

You can access further information about the HTA on naturopathy here: https://worldnaturopathicfederation.org/project/health-technology-assessment-naturopathy/